I recently went to Barcelona to work and take a break from cold and dark London.  I found my R&R in the form of wonderful amounts of sun, hours sitting in cafes with friends in plazas while drinking coffee, sangrias, and eating tapas.  I was living the dream of the Northern European on holiday.

I couldn’t hide in a tourist’s bubble however, since I accidentally ended up being in Barcelona during the general strike.  I was lucky to have found out about the strike before I left London because I was able to change my return flight (to a day later) and avoid being stranded in the city. 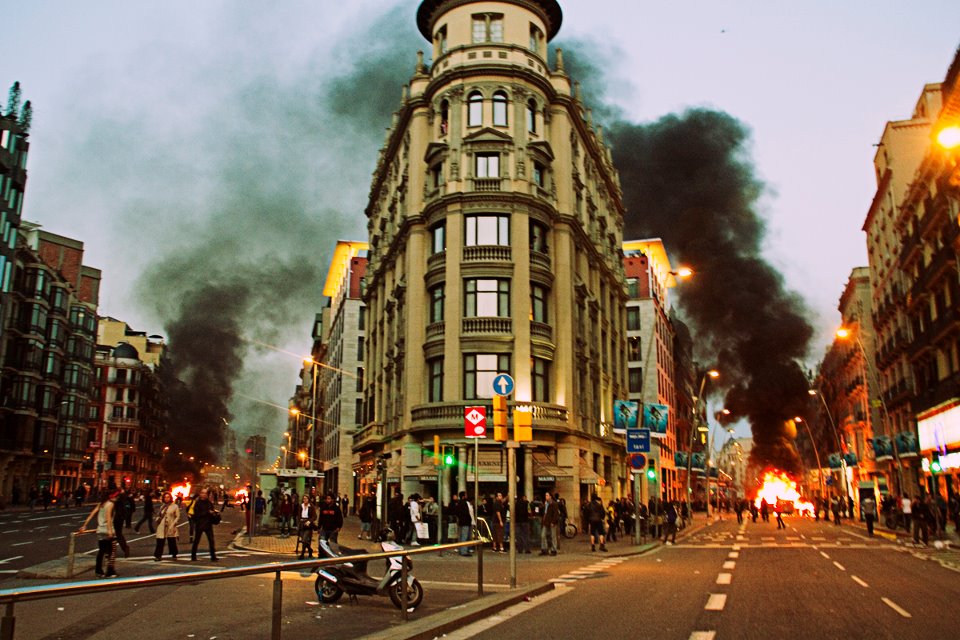 Even if there had been no strike, it would have been difficult to submerge myself into a tourist bubble regardless. The crisis is ever present in Spain, even in Catalunya, which has one of the strongest economies in Spain. There are a range of shocking figures for youth unemployment, from 50-65%.  Almost everyone I know in the city is unemployed. The few who have jobs report terrible stories, as in being told that of the 3 people working, only one would be paid that month.  Being in Barcelona reminded me of living in Uruguay and Argentina during their credit crunch in 2001/2002.

All of my Barcelona contacts are people who I know through the squatters movement in Amsterdam. Both Barcelona and Amsterdam are well known for having the strongest squatter and social centre movements in Europe, so there is quite a bit of traffic between the two.  It was quite interesting to hear the opinions of my Barcelona friends on squatting in general and how their lives in Barcelona compared with their experiences in Amsterdam.  They all noted that in Amsterdam, because one is a foreigner, and even more dramatically, a foreign squatter, one always feels completely isolated from what is seen as ‘the mainstream’ of Dutch society. Moreover, one internalizes the marginalization and xenophobia prevalent in Dutch public discourse despite having a critical view.  As a result, it makes it hard to ever feel at home since one is constantly under the impression of being seen as a parasite.  They preferred leaving a materially comfortable life in Amsterdam ( low costs, high standard of living) for a much more precarious and economically risky existence in Barcelona because they felt more socially integrated and comfortable.