Its early May and I haven’t blogged since the beginning of the year. The good news is that I’ve been so busy with various projects – commercial, academic, and artistic– that I haven’t had time. The bad news is that I feel choked with guilt when I neglect my blog.

Part of the reason for this temporary abandonment is that my ‘projects to blog about’ list keeps getting longer: 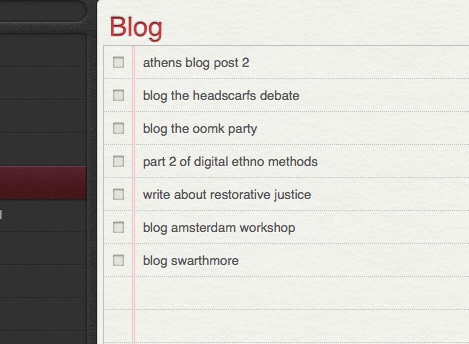 I’ve decided to short circuit this dread/guilt by writing an overview of my various activities rather than an in-depth examination. So here it goes.

1) Athens blog post 2: The first post about Athens primarily focused on the Athens Biennale, specifically the process to being invited and the experience of presenting. This 2nd blog post regards the experience of being in Athens, a city that has become synonymous with austerity in Europe. I have lots of thought about this topic, having lived in Montevideo, Uruguay and Buenos Aires, Argentina during their respective crises in 2001-2002, aka, el corralito.

2) The Headscarves Debate: In December, I organized a discussion/debate called, “What’s so scary about headscarves,” at South Kilburn Studios. I am a tenant in South Kilburn Studios and in lieu of rent, the tenants do a community giveback, such as by having a trainee, organizing public events/workshops, or particular projects that utilize our skills. This event was part of my community giveback.

I invited my friend, Sara Farris, a lecturer in Sociology at Goldsmiths, to present on her latest research on a phenomenon that she calls, “Femonationalism.” Femonationalism describes the recent tendency of right-wing, xenophobic, and Islamophobic movements in Europe to espouse feminist discourse as part of their attacks on immigrants and Muslims.

I also invited fellow tenants, Oomk to talk about their work as artists, illustrators, and zinemakers, whose magazine highlights the cultural production of Muslim women in ‘the West.’ Despite how different the presenters were– an academic sociologist and feminist Muslim artists– the discussion was vibrant! I was quite pleased.

3)The Oomk Party: Later on in December, Oomk and Disseminus hosted Live Lounge at South Kilburn Studios. Live Lounge is a monthly event organized by Disseminus at Rumi’s Cave, a Muslim art space on Willesden Lane in Kilburn. I watched a variety of acts, from a performative dance piece by a bearded man, to an out of tune but highly enthusiastic group of singing and drumming Malaysian cooks. There was no alcohol and the event was filled to capacity. What is the state of the Muslim art ‘scene’ in London in 2013/2014? This event gave me a glimpse to the answer to that question.

4) Digital Ethnographic Methods part 2: My first digital ethnographic methods blog post described the methods that I used to map a London neighborhood for a public sector client. In this post, my plan is to write about the anthropological theory behind such methods, specifically expounding on phenomenology and worldview. I was encouraged to write this post by Dr. John Curran, with whom I have been working on a number of amazingly cool applied anthropology projects.

5) Restorative Justice: This post originated from a project for another public sector client. I was training the community workers of a charity on how to conduct surveys as well as interpret non-verbal cues in a London neighborhood where there is tension around ‘regeneration.’ While preparing the training, I researched the history of this neighborhood and found some appalling information. Specifically, I learned that £55 million had been invested in the neighborhood via the New Deal for Communities program and that there were a number of horrible corruption scandals during this period of investment. Putting aside the training, I’ve been considering how to heal a damaged relationship when corruption on such a massive scale has occurred and whether restorative justice as a model is appropriate in such circumstances.

7) Swarthmore workshop: Again in March, I co-taught a workshop on ‘The Craft of Cooperation” with my friend and frequent collaborator, Noel Theodosiou, at Swarthmore College. I haven’t spent much time at the college since having graduated. I was amazed by the students. They were open, critical, reflective, honest, and incredibly transparent. Meanwhile, I stayed in Philadelphia with friends and was shocked by the urban decay of North Philly. I even took a bus ride which was… an experience.