“I’m sorry. I’m so so sorry.”: Notes on the aggressive apology in neoliberal Britain

I’ve been living in London for nearly two years now and its been easy to ignore the nation-state of England.  If you’re interested in English culture, it will be difficult to develop an understanding of what it means to be English if you live in London—or at least the parts of London where I’ve resided. Despite the overwhelming internationalism and multiculturalism of London, I have encountered the ubiquitous British apology so much so, that I’ve integrated it into my lexicon. I’m sorry. I’m so so sorry. 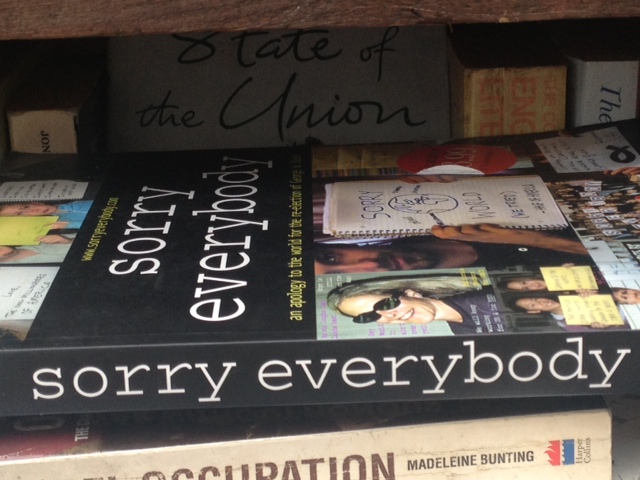 Coming from Northern Europe, where its rare to find an apology especially when someone has done you wrong, I initially found the British apology sweet and unassuming. Perhaps it was an expression of humbleness and humility? Did it demonstrate a care towards building relationships? Was it a mastery of the use of the subjunctive voice and the dialogic mode, which Richard Sennett claims is essential to master the craft of cooperation?

But now I see distinctions in the cadence of British apologies and recognize the ‘aggressive apology.’  Specifically, such an apology serves to deflect another person’s concerns/complaints while simultaneously failing to take corrective action or  responsibility. It’s an amazing exercise in how, with the right use of tone and language, one can act inconsiderately  without limits or censure.

It all started when I shared studio space with an English woman who constantly apologized. Did her machine make too much noise? She was so sorry! When I asked her why she had opened the windows with the heat fully blasting, she was deeply sorry. She found the air too stuffy and she apologized for not turning off the heat. I then noticed that she put her extra materials in my space. She was so sorry but she felt accustomed to using my space as storage. Etc etc. For the sake of peace, I didn’t say anything until I eventually exploded when she began appropriating my furniture and personal items. When I asked her why she had stolen my chair and removed my lamp, she was just so sorry but she really needed them. She was really sorry.

I thought that this was a one off–an encounter with a sociopath, but soon, I began noticing versions of this aggressive apology in other contexts. Politically, Nick Clegg, the deputy prime minister and the head of the Liberal Democrats, famously issued an apology for tripling the price of university tuition. Someone remixed his apology into a clever little ditty:

The film, Bridget Jones’ Diary, features a scene in which Colin Firth and Hugh Grant fight in a full Greek restaurant in Waterloo. As they smash through the tables, they punctuate each blow with an apology to the diners and servers. It’s  quite funny.

I’ve experienced so many of these aggressive apologies. My neighbor’s repairman who was so sorry that he parked across the front of the building, blocking exits and entrances. Another studiomate who locked her bike across the stairway to the studio forcing the rest of us—for weeks– to climb over her bike in order to enter the stairs. She was so sorry but she had to park her bike in that area since she had left on vacation and found street parking too risky. The university administrator who was so sorry that she had not paid my invoice after two months of waiting, and two weeks later, she was again quite sorry that she still hadn’t paid it, and two weeks after that, she really was so sorry. Yet another studiomate who moved my yogamat out of my space to a different room and left a note, apologizing for having moved it.

I’m not quite sure what to make of the English aggressive apology. Have I had bad luck, encountering people who are particularly passive aggressive and express themselves  indirectly  to avoid confrontation while simultaneously worsening a potential conflict?  Is this an unfair generalization? I’ve asked my friend Sarah Moore, one of my few English ‘mates’, who is a topnotch foodie caterer and budding anthropologist, to explain this  apology. She told me that I’ve experienced particularly crazy people but also,  suggested that I need to understand British shame and embarrassment better. She also says that English indirectness is the fabric of British society.

The jury is out.

"Exchanging the Pith Hat for the Crow Bar," Presentation at the Sense Loft, hosted by Sense Worldwide, London, March 2013