My book is out! It was published in the UK and Europe in the summer and in the U.S in September.

Publishing this book has been a long journey so the ‘end result,’ the actual printing of the book, was rather anti-climactic. Originally, my book was supposed to be out in the world in the fall of 2015. However, Bloomsbury Academic, with whom I had a contract, sold all of its social science books—including mine– to Manchester University Press. This occurred despite Bloomsbury’s assurance that since my book was under contract, they would follow through and publish it. I have feelings about Bloomsbury Academic. Many feelings.

It turns out that Manchester University Press has a fantastic reputation as a high quality and prestigious academic publisher. My main concern with leaving Bloomsbury was that I  wanted my book to be read by mainstream audiences, not just academics, and that Bloomsbury’s brand would have wider recognition and appeal.

However, MUP’s editors and staff have been significantly warmer, more responsive, and enthusiastic so in the end the change was good. They even re-designed the cover, incorporating a couple of old squatter posters that hang in my apartment. 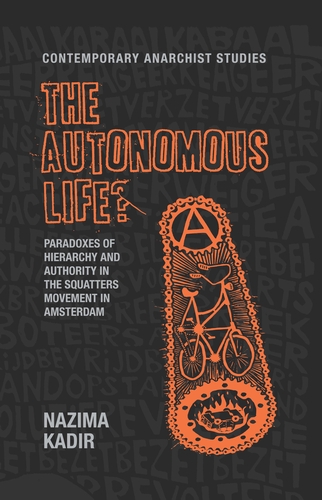 I was eager for my book to be published but after months of waiting out contract changes, copyediting, index creation, etc, etc, I decided to be zen about the process and stop pushing for a date. Then, one day in June my good friend, Debra Shaw, a cultural theorist and philosopher at the University of East London, texted that she had received the book. In the end, this sms was the only official announcement that I received of my book publication.

I’m not sure what this lack of ceremony means. I had expected that once my book was published, I would be overwhelmed with joy and pride. In turn, I ‘d organize book launch parties around London to celebrate this achievement.

Instead, I’ve felt ambivalent rather than ecstatic.

Its forced me to think critically about the meaning of publishing in 2016. Is publishing to post on social media or a blog? Is it graffiti on a busy street corner with tons of pedestrian traffic? Is it writing text, making photocopies, and distributing these copies to friends and neighbors? Or is it even writing a book and publishing it online, hoping that with enough downloads, a traditional publisher will do a mass printing?

Despite these questions about the value of publishing, I had undergone a traditional academic publisher route. This means that I expected a publisher to organize a peer review process, pay for copy-editing, print hardback and paperback copies, and  use their marketing machinery to sell and distribute the books.

Academics need to go through this process because a monograph printed by a prestigious publisher has become necessary to obtain a permanent position. However, as someone who does not work for a university, this process was a choice rather than a requirement. I suspect that this desire to publish though an academic press reflects the deep acculturation that occurs when obtaining  a PhD, that is, to always undergo processes to obtain external validation.

But academia is not the only factor here. The educated population who values literary culture in this Transatlantic world highly values physical objects. Despite the obsession with digital realms and possibilities, a printed book has more value than an e-book. Both are more valued when printed by an external publisher than if self-published.

Back! A summary of the last 18 months