A chapter of mine has been published as part of an edited volume titled, The City is Ours: Squatting and Autonomous Movements in Europe from the 1970s to the Present. PM press is the publisher and the volume was edited by Bart van der Steen, Ask Katzeff, and Leendert van Hoogenhuijze. Each chapter provides a portrait of squatting in a different European city. The cities featured are Amsterdam (penned by myself), Athens, Barcelona, Berlin, Brighton, Copenhagen, London, Poznan (Poland), and Vienna. On a side note, the list corresponds with the vacation spots of radical left squatters in these cities. This vacation spot swapping is the 21st century version of the Kula ring among left activists in Europe. 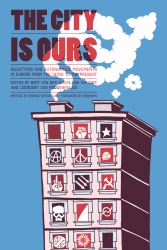 I wrote this chapter in the winter of 2011/2012 and substantially revised it in the spring of 2012, so its nice to see it published and circulating in the world in paper and digital form. Academic publishing is notoriously slow. I imagine that for the editors to compile such a diverse range of texts from writers and academics across Europe must have been quite a task requiring patience and diligence.

Writing this chapter was an enlightening and positive experience. When Bart initially asked me for a chapter, I thought writing it would be quite simple since he provided a clear structure. But I found that I had to construct a new argument in order to weave the sections into a compelling narrative. This was unexpected and led me to spend more time and energy than I had anticipated. I received invaluable feedback from my former IISG colleague and friend Elise van Nederveen Meekerk and Bart’s analytical comments and general patience supported me immensely. Lastly, I learned the importance of a good editor (thank you Bart!).