I just spent 3 weeks in New York city and its surroundings for a combination of work and personal reasons. I’m from New York, but its been 4 years since I visited so it was a bit of a big deal. I was amazed by how direct people were,  cutting right to the chase. I wonder if this conversational style was 1) due to our having a long history together and so there was immediate comfort without a need to small talk 2) cultural differences between Americans and Europeans. Europeans are so much more reserved and distant. Sometimes I found this directness comforting (the American in me) while other times, I was a bit shocked by it (the Euro). Oh, the hybrid self….

I went to visit Flushing, a neighborhood in Queens where I grew up. When I was growing up, Flushing was a pan-Asian neighborhood comprising of a mix of immigrants from Korea, China, Pakistan, Bangladesh, and India.  Flushing in 2013 is an outpost of China, a middle class Chinese city. Its not a Chinatown, which are historic Chinese ghettos with low quality housing, exploitative labor conditions, and whose residents are quite poor. Flushing was booming with grocery stores, cafes, restaurants, bookstores, malls. It was amazing. China is doing well economically and therefore, so is Flushing. 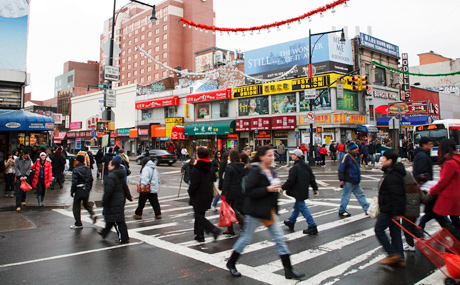 Flushing was bustling and there was an energy in the air that was missing from Manhattan.  The streets were filled. They weren’t just on their way somewhere else. There were plenty of people just hanging out, socializing. I loved it!

Having grown up there, I don’t think that I could ever move back. But having lived around the world, I now appreciate Flushing in a way that I never could have as a child.