In March, the artist Maria Pask and I designed and facilitated an observational skills workshop as a public art event in the Red Light District of Amsterdam.

The event was curated by the the Oude Kerk, the oldest church (and building) in Amsterdam which no longer functions as a place of worship. Instead, its a foundation that aims to connect cultural heritage and art. Since winter 2013, they have organized a series of ‘evening wandering’/ derives  events in the Red Light District, called Nachtelijke Dwaling, led by artists. This series is part of a concentrated effort during the last few years by the city of Amsterdam to change the Red Light District’s ‘brand’ as a space for sex, drugs, and partying.

In addition to reducing the number storefronts that sell sex and drugs and converting them into housing and shops that are considered more ‘respectable,’ the project seeks to attract a broader public into the Red Light District. The Oude Kerk’s Nachtelijke Dwaling series fits into this remit because it targets an art crowd who presumably would not prowl the Red Light District on a Friday night.

However, the whole premise of an evening wandering/derive in the Red Light District is deeply flawed. When I lived in Amsterdam, I avoided the Red Light District as much as possible in the evening. I had no interest in the seedy amusement park atmosphere, the groups of young men roving the area in packs, plus I found the specter of female trafficking disturbing.

Despite questioning the premise of the Nachtelijke Dwaling series, I felt excited and honored when Maria Pask approached me to design the workshop and facilitate it with her. Maria and I had worked fairly intensely together on the sitcom project. Our collaboration was a highlight of the sitcom experience. Maria is erudite, creative, and has a wicked sense of humor, so she’s immensely fun.

Maria had read my blog post about the Observational Skills workshop that I taught as part of Learning from Kilburn. She was curious if this format could work for the Wallen (the Dutch name for the Red Light District, referring to the old city walls). We met in London and by Skype to translate the format of the Kilburn class to the Oude Kerk workshop. In Learning from Kilburn, the class was scheduled for 5 hours with a maximum enrollment of 20 participants. In the Oude Kerk, we had 2 hours and 80 participants.

In Kilburn, I had structured the class into 3 sets of interactive exercises, in which each exercise built on the discussion and skills learned from the previous exercise. For the Oude Kerk, the shorter time frame and the large number of participants made such a structure impossible. We decided to chuck the first two exercises and build the workshop around the last activity.

The number of participants prioritized organizing the logistics of the event. We divided into four groups. Each group had a facilitator who led them through structured observations of two sites located within ten minutes walk from the Oude Kerk. Afterwards, the groups returned to the Oude Kerk and discussed each site, then shared their insights with the larger group.

I decided to experiment with first person perspective video tools. Specifically, having mounted a camera on my forehead, Maria and I filmed each space beforehand as a way to contrast the filmed observations with the perceptions  of the workshop participants. While each group described their observations, we played our films in the background.

Originally, I wanted quotidian and banal sites in the neighborhood as a means to illustrate the difference between observing and seeing. However, the Oude Kerk requested that we visit ‘hidden’ religious communities in the Red Light District. I resisted this request, but during the preparatory visit to Amsterdam, I felt astonished by the Christian communities and their spaces in the Red Light District. We visited Oudezijdes 100, a community of Christian volunteers who live and work together. The second Christian space was the Tabernacle of the Nations, which featured new age aesthetics. We also visited a cheese shop and a souvenir/sex shop. The sex shop symbolized the Red Light District and the cheese shop reflected the state-led gentrification of the area. 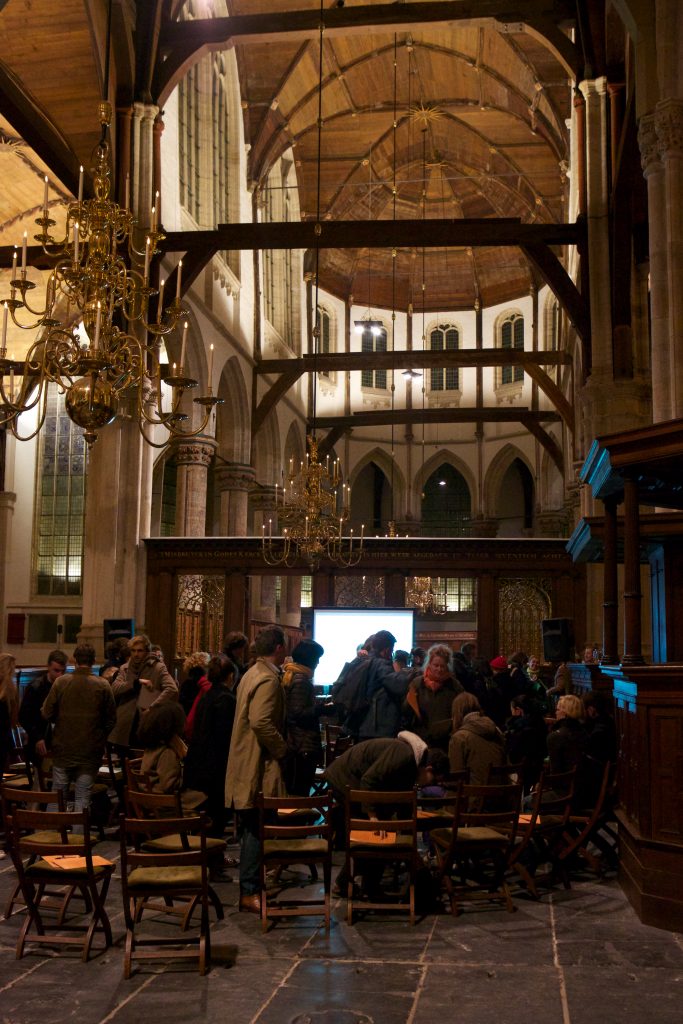 The whole evening was successful and Maria received positive feedback for weeks afterwards. I enjoyed the workshop as well and the challenge of tailoring it for 80 participants as a public art event. But, I prefer smaller groups in general to ensure quality. One bizarre side note was that a Dutch friend of mine participated in the workshop and had actually been a member of both of the Christian communities in her younger years. As a result, the workshop was a strange journey into her past.

Heartfelt thanks to Maria Pask for inviting me to collaborate, Julia Geerlings for being such an open and warm curator, and to the artist Eric Giraudet and Julia (again) for leading two of the groups through the observations.