Oh, the science of blogging. This post is about 6 weeks overdue, but no one will actually notice since I’m the only one who sets these deadlines. I seem to update this blog about every 3 months, which seems shamefully late since I should be actively promoting events rather than writing about ones that have already ended.

How do people maintain these social media personas in which they constantly post on twitter/facebook and their respective blogs? What discipline! What a commitment to performative exhibitionism! What a bizarrely Calvinistic thing for me to say!

This odd Calvinism must arise from the fact that I’m writing this blog post from the Munich airport, after having spent 5 hours doing a workshop on the Grand Domestic Revolution and Our Autonomous Life with Art Academy students, specifically those who form the Salong, a self-organised group within the Art Academy. This group occupied a room in the Academy three years ago and since then, have revitalized the space into a self-organised student art space, with a bar, kitchen, and many layers of activity. But more on this workshop later.

This post focuses on the premiere of the Grand Domestic Revolution (GDR) Exhibition at the Showroom Gallery in London. The GDR, a program initiated and curated by Casco, is now on tour. The first stop is in London, conveniently. It will also tour in Londonderry, Northern Ireland. 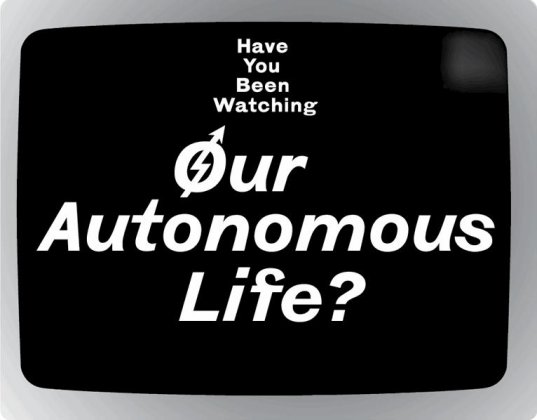 I experienced the GDR premiere as a convergeance of Our Autonomous Life sitcom castmembers. Three castmembers stayed in my strangely shaped 1-bedroom London flat, so I was immersed in a sensory blizzard of the Dutch language, the Dutch art world, Dutch politics, and serious discussions comparing Amsterdam, London, the Dutch welfare state, the lack of British welfare state, and my favorite topic, Dutch integrationist policies versus British neoliberal multiculturalism. Fantastic!

I asked a friend of mine, who is heavily involved in an anti-gentrification campaign of the Elephant and Castle neighborhood to give a special tour of the Heygate estate to castmembers of Our Autonomous Life on the day of the premiere.

I thought that given Bart and Klaar’s heavy involvement in the campaign against the demolition of the Van der Pek neighbourhood in Amsterdam North (Klaar plays Peter, Bart plays the Postman/Kraakbonz Dirk) and the sitcom’s underlying critique of the widespread eradication of social housing in favour of mortgage-funded, individually ‘owned’ properties, a tour of the Heygate estate would  inspire and fascinate  the castmembers. I also thought that it would be fun to promote ‘intra-European’ exchange of knowledge, since my friend arranged for the castmembers to meet residents of the Heygate who were resisting the forced displacement.

Later that evening, we reconvened at the opening of the GDR exhibition at the Showroom. This was my first visit to this space, located off the Edgware Road in Northwest London, close by Paddington Station. I was impressed by the dominance of Middle Eastern and Arabic shops and restaurants in this neighbourhood. London is not a city, but a planet, both exhilarating and exhausting.

The evening ended with a whole group of us missing the dinner that was served as part of the opening, cooked by residents of an elderly home located across the street from the Showroom.  We went to a Kurdish restaurant where we were served enormous portions. Another group of friends from the opening sat at a neighboring table, so I gave my plate to Binna, the director of Casco, who was part of this second group. Apparently, this gesture ended up being amazingly problematic because the restaurant owners then insisted that the people at the second table spend a minimum amount each. Their rationale was that such a minimum was necessary since they did not serve alcohol and could not profit from alcohol drinking, which usually provides a major source of income for most restaurants. A Kurdish artist at the second table then diplomatically negotiated some form of settlement with the Kurdish owners in order to clear up the misunderstanding.

Workshop, “Imagining the Grand Domestic Revolution in Munich” with members of Salong, self-organised group within the Art Academy in Munich October 16, 2012