For my summer holiday, I went to Greece this year, spending one week in Athens with a few heavenly days swimming and relaxing on an island. Athens is a fascinating city and I decided to re-connect with people who I met at the Athens Biennale. I was particularly interested in meeting with people from Embros, a squatted self-managed theatre in central Athens. One participant of the open assembly, Christina, had attended my talk on xenophobia among radical activists during the Biennale and had asked if I would give a similar talk at Embros. 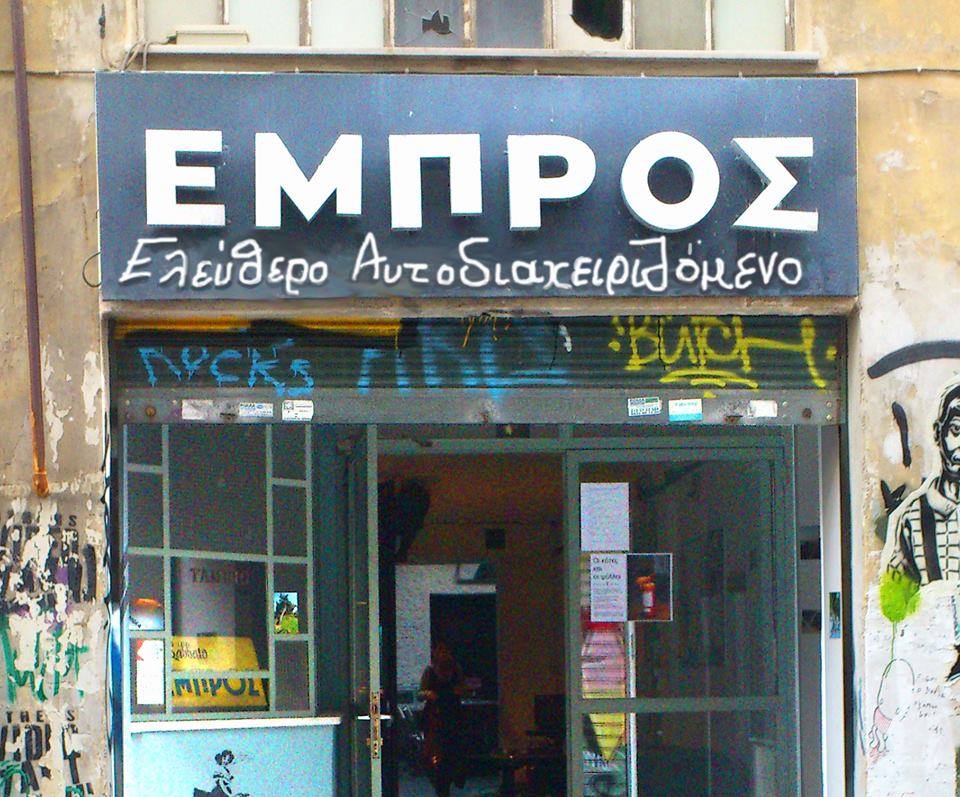 I was curious about this experience because I’ve given talks on my research in squats in the Netherlands and the UK, but I did not have any expectations for how Greek squatters/activists would react to my work, especially in the often highly contentious atmosphere of a squat. The anarchist movement in Greece has a reputation for being highly organized, widespread, and militant. Such qualities are often admired among radical activists and, in my experience, can breed a culture of dogmatism and ideological and behavioral inflexibility. As a result, I didn’t have much of an idea of how I would be received by Embros.

When I was in Athens in June, Embros was in the midst of a conflict with the state authorities. A few months earlier, while two actors rehearsed in the theatre,  police raided the building and arrested the actors for trespassing. The criminal trial was scheduled to occur while I was in Athens and Embros was busily campaigning on behalf of the arrested actors. The arrest and the subsequent campaign brought up a number of questions about the larger identity of the space and the people who run it. Are they squatters? Artists? Do they occupy? The group was trying to find ways to classify themselves and their work without falling into an inflexible identity that limits and diminishes the activities in this space.

Prior to the talk, I met with Christina to prepare. I wanted to get a sense of the audience to tailor the presentation to be useful and compelling for this group. I was surprised to learn from Christina that she found my talk on xenophobia among activists to be highly pragmatic for anyone working in solidarity with migrants. I had always considered my doctoral research to be interesting mainly on a theoretical level so it was refreshing to find that there were people who felt that they could apply it in their daily activist practices.

This presentation was unusual because of the need to translate from English to Greek. Luckily, my good friend Vasiliki, with whom I was staying in Athens, offered to do the fairly heavy work of translation. Vasiliki and I practiced the presentation together, slide by slide. We thought that translating per slide would be simpler for her and also more manageable for the audience’s attention span and comprehension rather than my doing the entire presentation in English, followed by  Greek.

The presentation itself went well. The theatre was full, which was exciting. I presented my points, interjected by Vasiliki’s translations. I then read an ethnographic story in its entirety to illustrate the points, again, followed by Vasiliki’s translation of the story, on which she spent an entire day (Thank you Vasiliki!). During the presentation, I felt as though I was living a scene from “Lost in Translation.” In that film, people spoke in Japanese to Bill Murry’s character in paragraphs and the translation consisted of 1 or 2 words.

In this case, I often spoke the equivalent of a paragraph and then heard what sounded like several pages of translation. I enjoyed these little breaks, partially because the spotlight was off of me and also because it felt very comfortable and supportive doing the presentation with a friend rather than alone.

The question/answer and discussion differed radically from other presentations. The audience reacted extremely strongly to the ethnographic story, which was about an undocumented Black African woman in the squatters movement and how her squatter housemates asked her to move out. People were angry and disturbed, feeling that the squatters should have helped her.

As usual, an academic attacked me on my positionality. She criticized me for not warning the woman that she was in danger of being asked to leave the squat. Although her tone was unpleasantly aggressive, she asked an insightful and provocative question. Usually, when people ask me about my positionality, they are offended by my critical analysis and actually are telling me that my experience and perspective are skewed. But in this case, she thought it was my responsibility to warn this young woman that her behavior was putting her on the path of being asked to leave the squatted house. I answered that, first off, I did not expect her to be asked to leave. Secondly, I did not think that the squatters were acting unfairly by doing so. I also said that even if I had warned her of such a consequence, I doubt that she would have listened to me. The audience found this response shocking.

After concluding the presentation, about 10 people approached me with questions. Mainly, they asked questions that I had answered in the first few slides, so either the combination of the theory and translation was difficult to understand or they did not understand my points. I wasn’t surprised by this lack of comprehension since most academic presentations are repetitions of the initial points. I re-explained the dissonance between radical activists and immigrants and the ‘logic of homogeneity.’ The group was especially upset by the behavior of the squatters in the ethnographic story, so I found myself defending the behavior of the Dutch squatters. However, the squatters’ reasoning for kicking out the African women was so intricate and culturally based that even while I explained it, I knew that no one really understood– or wanted to understand. I was invited by another activist, based in Thessaloniki, to give the same talk at an anti-racism festival. I was flattered but was going to be in London by the time of the festival.

Afterwards, a group of us went to a restaurant close by and relaxed. I felt so welcomed by the participants from Embros that my husband and I ended up spending time with them in Athens.

A few days later, Embros participants took us to an anti-racist/anti-fascist festival that was being held in the Prosfygika refugee neighborhood. In the wake of long-term neglect of the area, migrants, refugees, unemployed and homeless people were living in the buildings as squatters. Under threat of eviction by a private company contracted by the state to manage public property, an anti-fascist group was raising awareness and organizing through the festival, which was impressive. There were films, live bands, art exhibitions. Very cool.

We also explored Exarchia, the anarchist/student neighborhood in Athens. We went to cafes in legalized squats, visited a participant of Embros’s apartment, and soaked in the atmosphere. I had the sense that Exarchia in 2014 was similar to Kreuzberg, Berlin in the 90s. There is a particular vibrancy of expression and ways of being that seem to flourish during crisis and austerity. I write this without romanticizing poverty, unemployment, and despair during economic crisis.

On the theme of squatted spaces, we spent a day at a squatted municipal beach with Vasiliki. Again, the area was neglected and black-clad anarchists took over managing the space. They have a cafe and clean the beach weekly.

I love Athens and its vibrant, intense, politically engaged environment. I also really like Greek culture. I know that such a statement, although positive, is based on stereotyping a number of cultural characteristics but I’m going to do it anyway. I love the warmth, openness, hospitality, and expressive, verbally articulate culture. I felt welcomed by the Embros collective and enjoyed our engagement tremendously. Thank you Christina for the invitation, for translating the Q&A, and Embros in general!