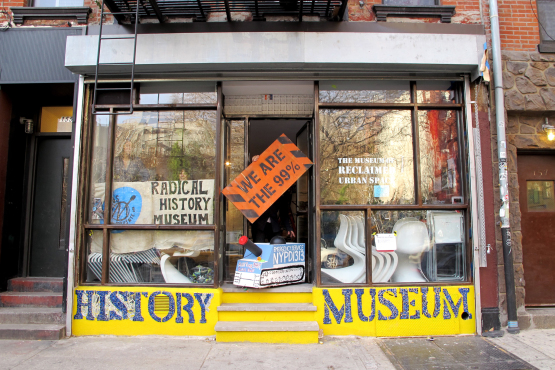 One of the highlights of my recent New York reconnection tour was presenting at the Museum of Reclaimed Urban Space (MoRUS). Amy Starecheski, a fellow Sqekker who is finishing her PhD in Anthropology at CUNY Grad Center on squatters in New York, connected me to MoRUS. Thank you, Amy!

I had no idea what to expect from MoRUS as a space. I knew that it was located in C squat, a legendary crusty punk Lower East squat which was one of the spaces legalized in the 1990s by Rudolph Giuliani.  I wondered if the Museum was located in the basement of an impenetrable old building or if it was a pet project that existed in someone’s living room. I was pleasantly surprised by the welcoming storefront and the beautiful photos of squat evictions, community gardens, cycle rallies, and Occupy Wall Street that lined the walls.

I had expected an audience of former Lower East Side squatters but instead, they were a random group of artists, academics, and people from the neighborhood. I was happy with the turnout and the questions but would have loved to engage with LES squatters. One of my absolute favorite books on squatting is Seth Tobocman’s graphic novel, “War in the Neighborhood.” This graphic novel, more than any other text on squatting, provides an unsentimental account of life in the squatters movement in the Lower East Side.  Its gritty, sad, moving, and inspiring all at once. Given that the graphic novel is already integrated into the collective conscious of LES squatters, I’d really would have liked to know what they thought of the sitcom and my analytical findings.

The Q&A was quite engaging, with a range of questions. One person asked if I thought that the dynamics of hierarchy and authority that I described were ‘good.’ This is a question that I’m asked quite a bit and I never know how to respond. I don’t think that its a matter of judging whether they are ‘good’ or ‘bad.’ Rather, I think its enough of a step to acknowledge their existence. By recognizing the dynamics, then one can move on to decide on how to change them. But to get caught up in whether these are good or bad can stop the process of reflection and change.