I recently attended a fundraiser for the Muslim feminist zine Oomk, who are fellow tenants at South Kilburn Studios.  The party was for women only and everyone wore handcrafted masks, which were beautiful and feminine. Except for myself, who wore a random Dr. Who cyberman mask, which was plastic, adolescent, masculinist and mass produced. Unexpectedly, the mask was a hit and lots of the attendees gushed about  how much they loved it. 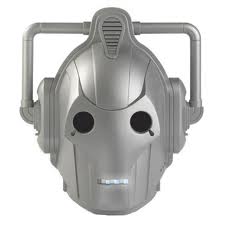 I wasn’t sure what to expect from the performances and the whole sphere of Muslim female artiness. I tend to be quite careful around religion while still respecting people’s beliefs and ways of being.

At this party, having listened to live music and heard poetry/performance art, I discovered the existence of a Muslim arts scene in London, probably centered in East London due to its enormous Muslim population. Almost everyone at the party was British born and raised, so its a homegrown phenomenon.

Regarding the quality of the poetry/performance art/music, I’m not too sure. I’m a big fan of Oomk and their work. I really love how  they  cross pollinate their influences and contribute to lots of different artistic and political spheres, such as DIY punk, riot girl feminism, etc etc.

But I wasn’t too excited by the performances that I heard at the party. They reminded me of the art/writing that came out of the identity politics movements centered at U.S universities (racial/feminist) during the 1990s. At the party, the women who presented seemed to direct their lyrics to an invisible audience who had disrespected  and Otherized them in the past.  I understand this anger. Its not easy to wear a head scarf even in an unusually accepting atmosphere such as London. Many of the women talked about how most people who interacted with them were surprised that they had senses of humor and personalities. Upon seeing the headscarf, people often immediately dismissed them as empty vessels of womanhood.

Having been active in  identity politics movements in the U.S when I was in university, I am critical  by these stances.  But I also realize that my reaction is not necessarily fair, and reflects my own relative privilege and distance from those experiences.  I fear that the only art that interests me is so self-referential, cynical, and clever that I’m putting myself in a different discursive corner.