Its been a few weeks since I last posted on the blog, so there is quite a bit to ‘report.’ I put the word ‘report’ in quotations since I have no idea who the audience is (if there is one) for this blog, and even if someone reads it, whether s/he cares about what I have been up to during the past month and  a half.

To follow up on my last post, I have completed the chapter, “Squatting in Amsterdam,” for Bart’s anthology on squatter and social center movements in European cities. When I last wrote, I was struggling to come up with a more coherent argument that would tightly knit the various empirical data and cultural analysis that I provided. I then sent a draft to a former colleague of mine from the International Institute of Social History, historian Elise van Nederveen Meekerk, for her feedback. She ‘solved’ the puzzle and suggested that I highlight my methodology. This solved the problem of coherence because by foregrounding the fieldwork as the lens through which I critically viewed the historical narrative of the Dutch squatters movement as well as the other practices that I describe, my argument became clearer.  I sent the chapter to Bart and his editorial team and am waiting to hear if they consider it finished or if they want more revisions.

Here’s an excerpt from the chapter:

… I had to confront a number of persistent problems and contradictions that illustrate the disparity between the stereotypes of the movement and the reality of  the movement in which I had immersed myself for years. While there were a number of people who more easily could be recognized as ‘a real squatter’ and identified themselves as such, most of the people in the movement did not. Many squatters were constantly in a state of negotiation with this imaginary ideal, while others, such as the examples of squatting that I began this chapter with, were so distant from it that they could not even be recognized within the framework of the Dutch squatters movement.  Given these stark disparities, I constantly had to question what it meant to be in this movement. This led me to distrust both the movement’s discourse about itself and social science literature because both failed to interrogate hidden assumptions that whether an act squatting was classified as part of the movement was partially based on who the squatters were as well as the manner in which they took over a space.  Thus, they accept without articulating the assumption that squatting must be an act of public overtake that is supported and enabled by an infrastructure of radical left subcultural spaces—and consequently, often populated by middle class European youth.

These disparities led me to conclude the following:

1) The mediatized images of the movement from the late 1970s and early 1980s, one of a massive youth activist movement which was heavily militant and eagerly participated in highly televised riots, has created a myth that has captured the left radical imagination. However, in the 1970s and 1980s, when this myth was created, it only represented a small percentage of those who actually squatted. This myth excluded the majority and the more importantly, the diversity of squatters. That myth is reified by current historical and social science literature on the movement which has, on the whole, failed to interrogate the accuracy of this myth and instead reproduced it uncritically. 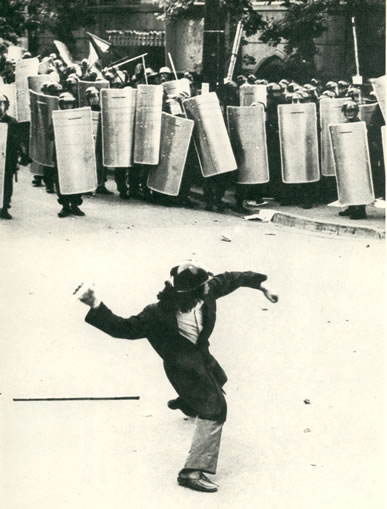 2) The myth of the militant, organized, confrontational, anti-authoritarian, articulate, and ‘autonomous’ activist—usually represented as a thin, white man wearing a balaclava, in his late teens, early twenties, throwing stones from the roofs of squatted houses or confronting the police— has become a dominant ideological paradigm in the movement. The myth itself serves as a beacon that often attracts many of those who participate to the movement and fulfills unresolved identity needs. 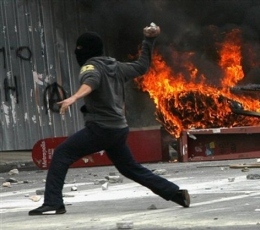 3) However, this myth is dogmatic and exclusive. Moreover, it is so powerful that movement activists are unable to go beyond the image and its limits. As a result, they are unable to address who they actually currently are in their complexity, diversity, motivations, and ideologies. Because they cannot confront who they are, they cannot address what to do in the face of a completely different—and increasingly hostile– socio-political context from which this image emerged.