Workshop, “Imagining the Grand Domestic Revolution in Munich” with members of Salong, self-organised group within the Art Academy in Munich October 16, 2012

I recently spent 24 hours in Munich  to conduct a workshop with members of  der Salong, a self-organised group of students of the Art Academy in Munich. 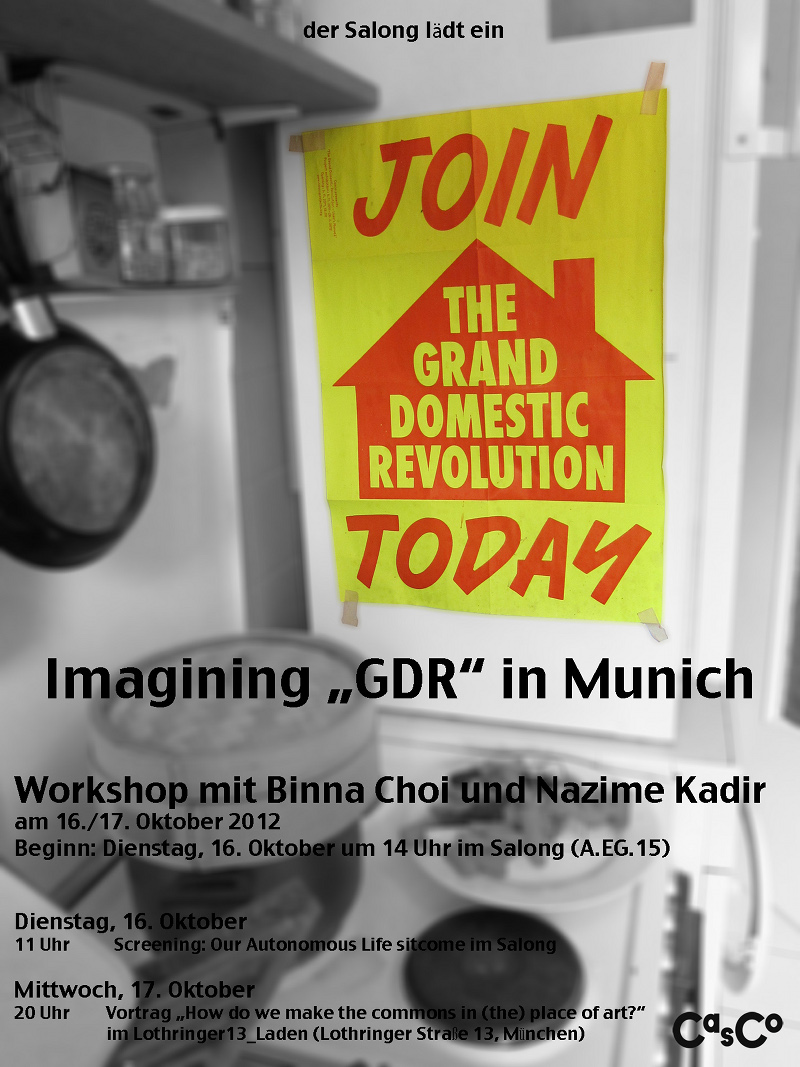 Binna, the Director of Casco, asked me to present at the seminar with her as well as give a public lecture on the second day. The timing for this workshop was complicated since I was working full time on a commercial research project at the time. However, I found the opportunity so inspiring that I took a day off in order to spend 24 hours in Munich with Binna and the art students, which meant that I could not be present for the lecture on the 2nd day. It’s a bit crazy to fly back and forth 2 days in a row, both for the environment and for my mental and physical health, but I feel a need to seek out intellectually engaging opportunities whenever possible.

My German experiences are an equivalent of a bizarre platter of tapas. I’ve spent loads of time in Berlin, mostly in cafes in Kreuzberg and Prenzlauerberg.

I have ‘tasted’ cities like Dusseldorf (an afternoon to get a necessary but ultimately useless visa for the UK, long story), Leipzig (a short weekend to conduct a workshop), and now Munich. I’ve heard that Munich is extraordinary beautiful, clean, and rich. Having only seen 2 neighborhoods in 1 day, I can confirm these impressions.

Coming from London, continental Europe is always a shock to the senses in the absence of noise and chaos. Clean streets, well-organized and relatively inexpensive public transport, and silence. Precious silence. I also had trouble sleeping in my well-insulated hotel room because it was too warm. I’m accusomted to my cold bedroom with single-paned windows and heat rushing out of the apartment as quickly as possible. The lack of insulation, the resulting cold, combined with market rent prices always throws me into a conundrum over my decision to live in the neo-Victorian capital of Europe. But then I remember how under stimulated I was in Amsterdam.

Back to the workshop. Binna and I spent the morning planning how to use the 5 hours with the students. We decided to use different formats; sometimes presenting, other times, interactive, and lastly discussion. Binna began by introducing the history of the GDR exhibition: how it came about and why. She talked about three projects in particular: Read In, Actie Schone Kunsten, and Our Autonomous Life. Rather than describing Read In, we role played it. We divided into two groups. One group enacted the Read In group, going from house to house, asking people if they could read in their house and discuss the texts. The second group played the people in the house, first rejecting the invitation, and then letting the group inside. We followed this role play by discussing Actie Schone Kunst and its manifesto.

We then moved onto discuss Our Autonomous Life (OAL). For OAL, we had a number of topics that we sought to address, such as the history of the Dutch squatters movement, housing policies and politics in the Netherlands, my doctoral dissertation and ethnographic methodology, and finally, the cooperative process of OAL.

Rather than presenting this information, we decided to format it interactively. I prepared a script of an email correspondence that I had with a squatter who sent me a series of hate emails. I then asked two students to play each role and read out the emails in a dialogue. From this email performance, we then had a discussion about the history of the Dutch squatters movement, my research and methodology, and the sitcom’s process. Binna also made sure that we talked about housing policies and struggles in the Netherlands.

The workshop with der Salong was inspiring and vibrant. They are critical, open thinkers. They also treated us to some wonderful pieces of cake!

Presentation at "Lights, Camera, Research: A seminar on film as a political research tool," Wednesday, October 31st, 2012 at the University of Essex